For someone who turned up her nose at the Women’s Studies Center at UCSB, it’s a surprise to find myself immersed in all kinds of projects related to women’s roles and influence in the world. The evolution in my thinking came about through literature, in a way, jump-started by my having worked for Valerie (Mrs. T. S.) Eliot after college. This page is a summary of my various projects related to women and power, and to the varied ways that exist for writing a woman’s life. 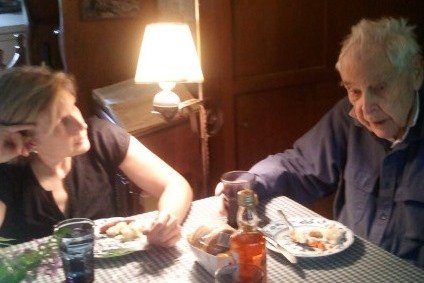 Not long before this photo was taken, Bill (William H. McNeill) had written my biography, a dramatic experience for both of us. Weekly suppers with him were part of my life until his death in 2016, at nearly 99. Bill’s The Rise of the West won the National Book Award in 1964, the year after Rachel Carson’s Secret Spring was a finalist. These two books are two sides of the coin, two sides of my life. Bill’s subtitle for The Rise of the West was A History of the Human Community, and he told me that it’d been up in the air whether that would be the title, with “The Rise of the West” as the subtitle. My preoccupation for years has been the intersection of ecology and community, and these were subjects Bill and I always came back to. Read more about him: W. H. McNeill (1917-2016) [obituary] in the New York Times and my reflections, “Celebrating William H. McNeill.” This photo was taken 29 May 2013 in Colebrook, CT, by Rachel Christensen.

I am writing, and blending, several women’s lives, in a book entitled Too Near the Flame. In it, I explore women’s attraction to influential, charismatic men by folding together the stories of Sophia Wittenberg Mumford (1899-1997) and Valerie Fletcher Eliot (1926-2012), famous wives I knew when I was young. It’s a subversive take, however, on Cinderella, using my own experience as well as the detective work I embarked on after Valerie Eliot’s death  to give the book a modern framework. Our interconnected stories span more than a century, from World War 1 to #MeToo. Sophia and Valerie’s biographies are based on extensive research on both sides of the Atlantic and unique access to people who knew them. I tell a longer history, too, from ancient Greece all the way to modern Chinese “dragon ladies” (one of the topics I’m working on as an associate in research at the Fairbank Center at Harvard). Too Near the Flame is a book about “hidden figures,” showing how women’s options and ambitions have changed over the last century. It’s also the story of how women have used men, as well as being used by them, to find bigger worlds and create epic lives.

I was involved in a forum conversation about print and digital books last week, which inspired me to take this photo of some of the books I was given by the family of a British [...]

The Love of a Good Woman

This is my account of the first day at Princeton, 2 January 2020, published in Time Present and in the T. S. Eliot Studies Annual, Volume 3, edited by John D. Morgenstern (General Editor), Julia [...]

With several others who were at the Firestone Library at Princeton on 2 January, I've contributed a piece to Time Present,  the newsletter of the T. S. Eliot Society, which will then be published in a [...]

The January 2020 opening of T. S. Eliot’s love letters to Emily Hale was momentous for those who study Eliot, and raised the profile of one of the women in Eliot’s life to an extent no one expected. Reactions vary, and the #MeToo aspect of Eliot’s behavior has divided male and female scholars. I stood by the lockers after the archives were closed that first day talking with a reporter about what I suspected was Valerie Eliot’s role in writing the “I did not have sex with that woman” letter that Harvard had released at lunchtime. Here’s his article in The Times.

Time Present, the journal of the TSE Society, has essays by those of us who were at the archives for the opening. The essay cluster is being published in volume 3 of The T. S. Eliot Studies Annual. 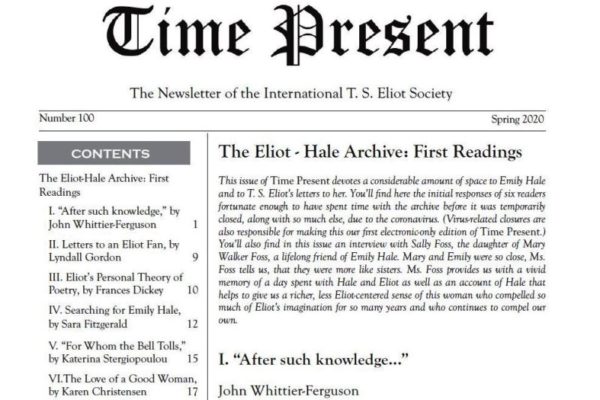 In March 2019, I spoke at a conference at Oxford called “Thanks for Typing: The invisible wives, daughters, mothers, and other women behind famous men.” I’d fortuitously heard about the conference from a listserv, and was able to attend because it took place the week before the London Book Fair (remember those days, actual physical, face-to-face events?). It was thrilling to see all the work being done today to bring fascinating and talent women into the light. The variety of papers was stunning. I then wrote several articles about the event and the concept, was interviewed for a podcast, and finally expanded my paper into a chapter for a book that’ll be coming out in 2021. We’re now hoping to hold a second conference to coincide with the book’s release – and in fact this will be easier because it can be virtual. But I really don’t think this aspect of writing a woman’s life would have become so important to me had I not been able to meet Juliana Dresvina and the others in person! 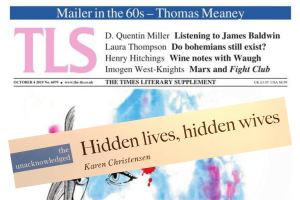 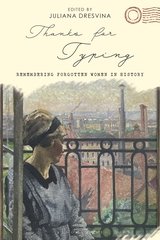 Here’s an extract from my chapter, “Jumped-up Typists”:

Although they met only once and were born a generation apart on different sides of the Atlantic, Sophia Wittenberg Mumford (1899–-1997) and Valerie Fletcher Eliot (1926–-2012) had experiences and traits in common, and their trajectories offer contrasting examples of what it means to be the woman behind a famous man. . . . I knew both women well and find that their stories provide a window into the way women have channelled their ambitions into service to an influential mate. . . . 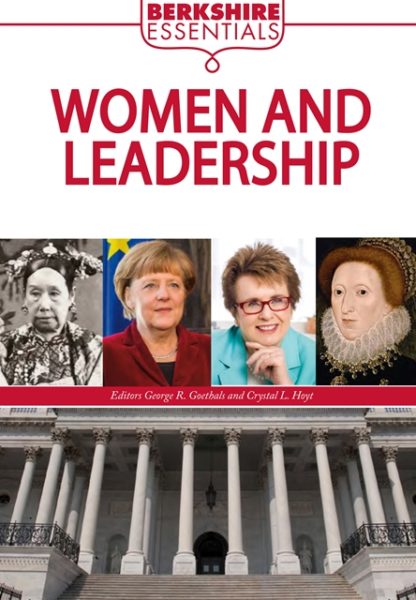 Women and Leadership provides valuable research by experts on leadership and women’s history to help students and citizens who want a more nuanced explanation of what we know about women as leaders – and about how they have led in different fields, in different parts of the world, and in past centuries.

Thanks to Chinese law professor Jerome A. Cohen, I met Gerald and Nina Holton in 2014. The Holtons had known the Mumfords in Cambridge, MA in the 1970s. Through Gerald Holton, I learned about a collection of letters between Mumford and his last lover, Jocelyn Brodie, which are now at the Schlesinger Library thanks to the efforts of a family friend, Ann Braude, a professor at the Harvard Divinity School. Our conversations led to a panel on “Three Loves of Lewis Mumford at the 2021 Organization of American Historians Conference. The recording of the panel is unlisted but can be viewed with this link: https://youtu.be/aX2Qlr26pH0. Here’s the program description:

Lewis Mumford, one of the most widely-read and far-ranging public intellectuals of the twentieth century, referred in autobiographical writing to his “loves,” plural, the women who engaged him both intellectually and sexually. Mumford found intellectual and sexual attraction mutually reinforcing. His view that sexual and intellectual exchange could not be separated was an aspect of his call to twentieth-century Americans to live as whole human beings, not as the segmented, alienated products of a mechanized world. But it was also a source of conflict with his desire for a stable marriage that would support his legendary literary productivity. What Mumford did and did not reveal about his adulterous love affairs has complicated the reception of his autobiographical accounts and of biographical treatments of him. It has also obscured the characters and careers of the women he loved.

Upending the historiography on Mumford, this panel will look at his three best-documented “loves” from the point of view of their own interests, and ask how they advanced their own agendas—intellectual, creative, personal, and sexual–through their interaction with Lewis Mumford. First and foremost among these women was always his wife, life-partner, and sometime editor, Sophia Wittenberg Mumford. But he also placed much importance on and exchanged extensive correspondence with two other women, one in youth and one in old age: Catherine Bauer and Jocelyn Brodie. All three of these were notable historical actors in their own right whose stories nonetheless became mere shadows in the bright light thrown by Lewis Mumford. The panel consists of three papers, one on each of these three women, examining her creative work outside her relationship with Mumford before viewing it in light of that relationship.

Karen Christensen’s paper on Sophia Mumford, “A Book of My Own,” is based on extensive interviews she conducted with Sophia Mumford before her death. She explains the self-evaluation that Mumford undertook in her nineties, which included comparing herself with the other women her husband had loved and assessing the choice she had made to let her life be governed by his work and his needs.

Ann Braude discovered both sides of the suppressed correspondence of unknown artist Jocelyn Brodie and Lewis Mumford in Brodie’s rural Vermont home following Brodie’s death. The paper situates the ten-year correspondence within the trajectory of Brodie’s literary and artistic oeuvre, as well as exploring both the reasons the correspondence began and the reasons it was suppressed.

Ann Braude, director of the Women’s Studies in Religion Program at Harvard Divinity School.
Karen Christensen, author and CEO of Berkshire Publishing Group, writes about women connected to powerful or influential men, among them Sophia Mumford
Nancy Cott, Jonathan Trumbull Professor of American History at Harvard University. specializes in gender topics in the US in the 19th and 20th centuries
Aaron Sachs, professor of history at Cornell University, specializing in nature and culture and working on a book about Herman Melville and Lewis Mumford

International Encyclopedia of Women and Sports

I read Carolyn Heilbrun’s Writing a Woman’s Life by chance, at a time when I had been saying that I didn’t want my life determined by a man. I was on a book tour in the autumn of 1990, visiting Seattle and San Francisco to talk about the US edition of Home Ecology. The friend I was staying with was going to her book club the night I arrived and she’d alerted me that they would be discussing Writing a Woman’s Life.

In my copy is a bookmark from the famous Elliott Bay bookstore as well as a pressed flower from the next spring, which I spent in Devon exchanging daily letters with a lover in New York who was pleading with me to change my plans to come and be near him. Heilbrun explores why some women stay single, become single mothers, or attach themselves to men who will look after them in order to pursue their careers and follow their dreams. I thought I was following a similarly self-determined path, not seeing the extent to which I was letting a man take charge of my life. 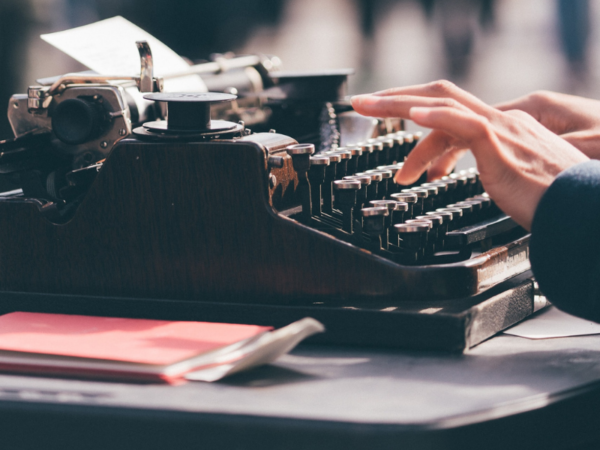