I’ve just read a tiny hardcover book called Women & Power: A Manifesto by the celebrity classics scholar Mary Beard. It consists of two edited speeches with black-and-white illustrations (I’ve pulled the color versions of a couple of them for this post) and sells at US$15.95.

I had high expectations. “A Manifesto” sounds quite definitive, doesn’t it? But in the end Beard simply says we don’t really have a model for women and power. 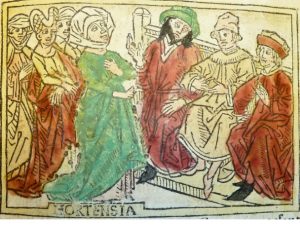 While I am not ready to introduce my own manifesto, I want to point out two significant problems with Beard’s argument.

Admittedly, she is a classics scholar and “classics” still seems to mean only Greece and Rome. But I can’t help wanting examples from Asia, Africa, and indigenous cultures. Surely even classics scholars might do a little global exploration?

But the major problem can be summed up with a simple question: What did Penelope do when she went upstairs? 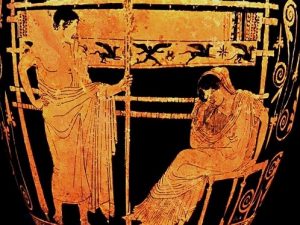 Here’s the story, which leads the book: Penelope, wife of the Odysseus, who is still away on his travels, enters a room where a musician is performing. She tells him to sing something else, and her son Telemachus interrupts, saying that she should be silent and go back to her loom (a symbol of her patient fidelity to Odysseus). Speech is the business of men, says Mary Beard. Telemachus has the power. Penelope is silenced, “And off she goes, back upstairs.”

This is the silencing of Penelope, the first time in Western literature, says Beard, that a woman is told to shut up. This silencing sets the stage for all the subsequent silencing of women all the way up to the present.

Beard’s problem is that she didn’t follow Penelope upstairs.

I approach this differently. I start with the certainty that men and women in ancient Greece weren’t really very different from us. Our brains are the same, our DNA hasn’t changed. You can find women on the planet today who live in cultures where beliefs about male superiority are pretty much the same as that of Penelope’s.

Beard says Penelope was “savvy,” based on her handling of the multitude of suitors she apparently fended off for years. When I follow her upstairs, I hear her telling her serving women was a jerk her son is becoming, he used to be a nice boy but now look at him. And anyway she was sick of dealing with all those ridiculous men and wouldn’t it be nice to get away for a few days?

Bill (William H.) McNeill insisted that a good historian should use their imagination, and we certainly need to do so when we’re trying to understand the lives of people who weren’t writing down their own stories.

Penelope might have been silenced in public, but does not prove she was silent or passive. Like women throughout history, she no doubt looked for ways to get what she wanted while preserving her image as a model of wifely discretion and loyalty. What I see in Penelope’s story is something I see in many accounts from past centuries, and even more recent decades: a woman who is a realist about the world she has been born into.