Cooking through a crisis

Cooking through a crisis

After I published the post “To Cook A Wolf – Baking with M F K Fisher,” the cookbook platform ckbk suggested we collaborate in promoting an idea we both clearly believe: that home cooking can help us get through the COVID-19 crisis.

I had picked up How to Cook a Wolf because it’s about eating during an emergency era, dealing with strained budgets and scarce provisions.

M. F. K. Fisher tackled the challenge of hearing the wolf at the door with panache.

It is true that, when the wolf first proves he is actually there, you feel a definite sense of panic. ‘To work! To work! In heaven’s name!’

You talk with your friends. They are either as bewildered as you, or full of what sound like ghastly schemes for living with three other congenial couples and buying all their food from the city dump. 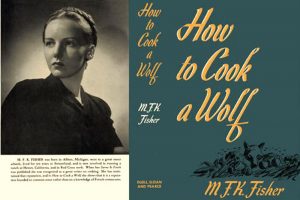 Thinking of what ordinary citizens coped with during World War II is a good way to plan for the future, too. Environmentalists have been saying for years that to tackle climate change we need the unity and sense of common purpose and willingness to sacrifice that we showed during World War II. (”Saving civilization will take a massive mobilization, and at wartime speed. The closest analogy is the belated U.S. mobilization during World War II.” —Lester Brown in Grist.)

I discovered, and devoured, M. F. K. Fisher when I was in college. Her stories of life and love, as well as gorgeous meals set in places I longed to visit, riveted me. I’d never come across anyone who wrote about food as something that really matters, with a style that made me think she was someone I would want to be like: elegant, poised, wry, intense, quietly passionate.

For years, I was haunted by her directions for scrambled eggs: “This takes perhaps a half hour. It cannot be hurried.” I learned about a grain called kasha,  and got a lesson in making beef tartare.

But rereading To Cook a Wolf in 2020 was something of a shock. The cuisine she knew was, in 1942, far more sophisticated than anything I came across until I was in college.

Her recipes include cloves of garlic, without comment or any suggestion that this ingredient was daring, or optional. Even into the 1980s, garlic salt was as far as most people I knew would venture. Fisher’s 1942 recipe for Gaspacho calls not only for garlic but for “a generous mixed handful of chives, chervil, parsley, basil, marjoram . . . Any or all, but fresh,” and “1 small glass olive oil (or really flavorful nut oil or substitute).”

This, she writes, “is a perfect summer soup, tantalizing, fresh, and faintly perverse as are all primitive dishes eaten by too-worldly people.”

Many cookbooks of that vintage are useless today, but most of Fisher’s recipes, and suggestions, are completely current. In fact, when she urges readers to make salads with a variety of blanched vegetables, she’s suggesting something I’ve just learned from Chinese cookery. It’s a really practical approach these days when salad greens can be hard to come by.

The book is also a household manual, though a most eccentric one. It includes chapters on feeding children, pets, housekeeping, saving energy, and even making mouth wash. She is forceful about the right (and simplest) way to wash dishes, urges us to hang a mirror in the kitchen so we can check for smudges before going into dinner. And she shrewdly advises against uses scented hand lotion before cutting up vegetables (and explains how she rubs her hands with whatever mild fat she’s cooking with – butter and oil will do).

Given wartime shortages, her emphasis is on saving money and avoiding waste. It’s amusing to think of the glamorous Fisher saving vegetable-cooking water and oddments of fruit juice, but she does this in characteristic fashion: in an “old gin bottle in the icebox.”

The chapter on liquor and wine is entitled “How to Drink to the Wolf.” I enjoyed the warning that “liquor by the case is generally about ten per cent less expensive than by the bottle, and generally it disappears at least ten per cent faster.”

She advises us to save money by drinking at home (social distancing!), but with a companion (safe in lockdown!). And there’s a particularly modern note: she recommends that we drink local beer. 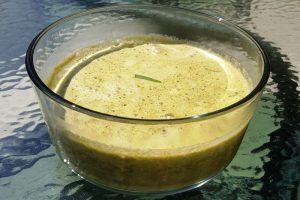 There are plenty of soup recipes. I made a version of Potage Else today, following the postscript note about a favorite soup of Fisher’s made from whatever greens and herbs she had available. She writes that she would grind them to a paste in a mortar and pestle, then add rich milk and “chill it very well . . . for a summer lunch.” 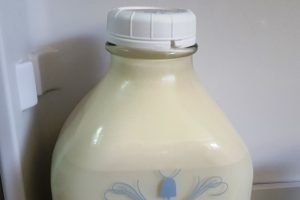 This is a lot easier today with an immersion blender, but I used a “rich milk” she would recognize: the creamy layer from the top of a new bottle of milk from North Plain Farm in Great Barrington.

It was the chapter on bread that really made me see how much our experience during COVID-19 echoes that of wartime, and why flour has been so hard to come by (I just bought a 50-pound bag of wholewheat flour from Taft Farms after being unable to get wholewheat since before the crisis began in March).

There is no chiropractic treatment, no Yoga exercise, no hour of meditation in a music-throbbing chapel, that will leave you emptier of bad thoughts than this homely ceremony of making bread.

It will smell better, and taste better, than you remembered anything could possibly taste or smell, and it will make you feel, for a time at least, newborn into a better world than this one often seems.