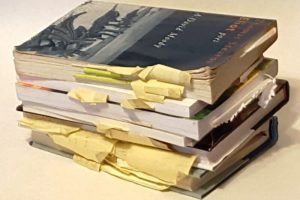 I was involved in a forum conversation about print and digital books last week, which inspired me to take this photo of some of the books I was given by the family of a British biographer. The biographer herself, Carole Seymour-Jones, had died before we could meet, but she’d been very positive on the phone and her family offered me her books to help with my related project. They are full of her notes, occasional letters and receipts, and even a pencil marking a place. Another biographer, the late Deirdre Bair, spent an hour going through this collection last year, so they now also bring her to mind.

I have many books with the names of previous owners in the flyleaves, sometimes in faded spidery handwriting from the early 20th or even the 19th century. I have opened books to find flowers I tucked away to dry, and bookmarks from bookshops in different states, different countries, other times.

This makes me think of the wonderful book The Social Life of Information, by John Seeley Brown and Paul Duguid. It opens with Paul’s story about a researcher who noticed the smell of vinegar on old letters and discovered that vinegar it was used to disinfect letters sent from towns with confirmed cases of cholera. The smell provided information, an additional scientific data point. Here’s an NPR story about the book.

And to bring things full circle, it was Paul Duguid who encouraged me in the first place to write about my experiences working with Valerie Eliot. We’d met to talk about the Encyclopedia of Community, but he knew the Eliot story and wanted to hear about Valerie, and then urged me to write something for publication. My memoir, “Dear Mrs. Eliot,” was published in the Guardian Review in 2005, and that eventually led me to the project, Too Near the Flame, which is what connected me with Carole Seymour-Jones.