With several others who were at the Firestone Library at Princeton on 2 January, I’ve contributed a piece to Time Present,  the newsletter of the T. S. Eliot Society, which will then be published in a special forum in the T. S. Eliot Studies Annual, published by Clemson University Press.

When I started working with Valerie Eliot in October 1986, I swore that I wasn’t going to be sucked into the Eliot orbit. But the damned story followed me! I now swear that I couldn’t help it, and when someone says, “Are you an Eliot scholar?” my answer is, “I guess I am now.” Sort of.

I read T. S. Eliot’s first love letter to Emily Hale side by side with Daniel Bates, a Brooklyn-based stringer for the Daily Mail. After a few paragraphs we looked at each other, speechless .

I don’t know why we were so entirely on the same page about this, except that it was the only overview or introduction we would have, and as good scholars we wanted to read a summary before digging deep. But I had another reason: I simply wanted to be sure that the document existed, that Hale had not destroyed it and left Eliot’s side of the correspondence as the only record. . . . 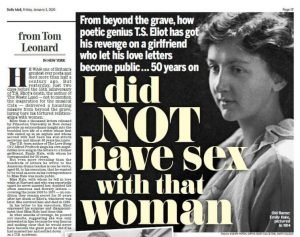 The rest of this will be published shortly and I’ll link to it.

An article in the Daily Mail was published with the headline “I did NOT have sex with that woman.” It has someone else’s byline and a very different, very Daily Mail approach, but that’s another story.

Here’s what will appear in the Eliot Studies Annual:

The Love of a Good Woman
Karen Christensen 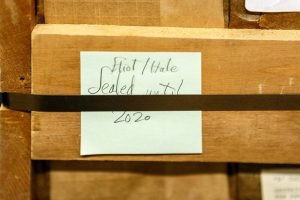 “For Whom the Bell Tolls”: Reading the Quartets after the Letters to Emily Hale
Katerina Stergiopoulou

“After such knowledge . . .”: Readings in the Eliot–Hale Archive
John Whittier-Ferguson