Valerie Eliot and the making of CATS

Valerie Eliot and the making of CATS 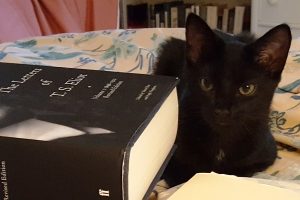 When I started working for Valerie Eliot in 1986, the musical Cats was only a few years into its record-breaking run in London, but it had already made Valerie a wealthy woman.

She was defensive about it, as she was about many things, and would use me as a sounding board. She loved having the money, no doubt; she was good with money and would allude to decisions about her stock portfolio with that confidence that people have when they are talking about something they understand and enjoy.

But she never wanted to appear crass or merely commercial, and she was always trying to reassure herself that letting Andrew Lloyd Webber turn Old Possum’s Book of Practical Cats into a musical would have delighted her Tom, her late husband T. S. Eliot. “He loved the theatre,” she would say, “he would have been delighted.”

What she told me, and I believed until just recently, is that she had laid down the law to Lloyd Webber. He couldn’t change a single word. The only way she would given him permission was that he would respect the integrity of the poems and use them exactly as they had been published.

Over the years, I always explained Cats as an amazing creation because of this limitation imposed on Lloyd Webber. “The only thing that’s different at all, I would say, is the song ‘Memory,’ but that’s based on lines in an Eliot poem.”

Well, if you know Cats and have the poems, you’ll know that I was wrong: what Valerie told me was far from the truth.

Her nephew Graham Fletcher has told me that she asked his advice, and told the story in a talk to the T. S. Eliot Society:

In 1978, Val asked me about Andrew Lloyd-Webber, and spoke of her reluctance to allow a ‘pop’ star (as she then viewed him) access to Old Possum’s Book of Practical Cats, which he’d apparently already started to set to music. Knowing my aunt believed one should always seek out the ‘best’ of artists – indeed any expert in any given field – I argued that Melvyn Bragg had given his approval to Lloyd-Webber’s Variations on a theme by Paganini and used it for the South Bank Show. We took a cab to Harrods where Val bought the cassette recording and returned to the flat to play it on the Dynatron.  Unfortunately the cassette was faulty, and I had to make strenuous efforts to urge Val to speak to Melvyn Bragg or his producers, stressing that Lloyd-Webber’s father was the respected Principal of the London College of Music, and his brother a classical cellist.

I’ve now read Lloyd Webber’s memoir, Unmasked, and learned that Valerie could have taken a great deal of credit for the success of the musical because she’s the one who proposed the addition of Grizabella, the Glamour Cat, who inspired “Memory” (the “million-dollar song”) and gave a narrative arc to the entire production.

And much as she seems to have presented herself as protective and cautious and worried about literary integrity, I see a shrewd woman who loved the idea of a big London musical. Did she actually enjoy the show? I have no idea.

She did like flying to New York for the Tony Awards, and the round of celebrations as Cats made theatrical history. Then it was back to her life’s work, the editing of the letters. And that’s where I came in.

PS: The photo above was taken in early 2019. One of my new kittens got on the bed while I was flipping through volumes of the Eliot Letters (now eight, and expected to be at least twenty). It was only when she perched right next to one of the books that I realized she looked just like the Cats poster.