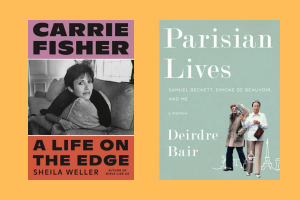 A year ago I was accepted into a group called “Women Writing Women’s Lives” (WWWL) in New York. I thus became part of a community of biographers and memoirists who write about women, and, for the first time in my life, a member of a women’s group. (That is, if you don’t count Girl Scouts, which I dropped out of after only a week – twice.)

November 12th happened to be the official publication date for new books written by two of my friends, both greeted with much acclaim. Parisian Lives, a “bio-memoir” by Deirdre Bair, whom I met at WWWL, is a Publishers Weekly Best Book of the Year. Carrie Fisher: A Life on the Edge by Sheila Weller, whom I first met through friends in the Berkshires, was one of Five Books Not to Miss for November in USA Today.

Deirdre Bair, a National Book Award-winning biographer, breaks new ground by writing about her development as a biographer and her relationships with the subjects of her first two biographies, Samuel Beckett and Simone de Beauvoir.

Sheila Weller, who is known for her books and articles about contemporary women celebrities, has taken on a complicated Hollywood figure who evolved from Princess Leia into a bestselling novelist and, shortly before she died at 60, played General Leia Organa in Star Wars: The Force Awakens.

Very different types of biography, indeed. Parisian Lives is highbrow and intellectual, while Carrie Fisher is about movie star’s life. But both Deirdre and Sheila had a sense of connection with their subjects and these connections are important to the stories they write. Sheila, for example, grew up in Los Angeles, and the ambitions, compromises, successes, and failures of her celebrity subjects are familiar territory. In the case of Carrie Fisher, she even has a similar parental divorce history.

Parisian Lives gave Bair a chance to explain the extraordinary struggles she faced in order to be taken seriously as a biographer. She also writes about finding childcare, long commutes, ferrying kids to lessons, and freezing family meals before leaving on a research trip.

Both books made me think about what I now see as feminist concerns: our need for a sense of personal identity and significance, and our striving to have it all, which often means trying to be all things to all the other people in our lives.

We long to be recognized, to be known and seen and understood. In Parisian Lives, Bair touches on this: “Saint Augustine provided the answer for what drew me to Beauvoir: I had become ‘a question to myself. Not even I understand everything that I am.’” I’ve heard this echoed many times, and it popped up in a recent article about Hollywood star Emma Thompson: “All her life, she knew who she was. Now the roles she had embraced — mother, wife, performer — have her asking, ‘Am I any of those things? And if I’m not, who am I?’”

I was fascinated by what drew Bair, and other women of her generation, to Beauvoir. She saw in Beauvoir “all the possibilities for the perfect life and relationship,” “a woman who did indeed do it and have it all.”

She is probably the only modern woman who made a success of everything. At that time, and like every other woman who had read her four volumes of autobiograplw, I believed that her relationship

with Jean-Paul Sartre was the perfection she claimed it was. Like so many other women who counted The Second Sex as an important coming-of-age book, I regarded her as both paragon and icon.

Bair found out that Beauvoir and Sartre’s relationship was far from perfect or equal, and Beauvoir certainly doesn’t emerge from the book as someone to emulate. But she remains impressive, and in some ways more impressive for all the difficulties she faced and kept quiet about.

In contrast, Carrie Fisher’s success as a writer came from her willingness to be honest about her failings. She wrote and joked about her substance abuse and bipolar disorder, and snapped back when she was criticized for being older and fatter than fans of Princess Leia thought acceptable.

We have moved beyond the day when biography was just a celebration of Great Men. Sure, there are still plenty of stories about the perfect lives of famous and influential people. Readers and viewers still get pleasure from imagining themselves in a glamorous role, or as a Cinderella. But sometimes it’s a comfort to find out that movie stars and famous writers face the same challenges that every woman – maybe every human – does.

I highly recommend both books, which are of course available from all your favorite booksellers, and am delighted that Deirdre Bair is now going to write a book about T. S. Eliot, something she apparently was asked to do many years ago and has always wanted to take on. It’ll be wonderful to have such an eminent biographer working on the husband’s life while I focus on the women, and especially his second wife Valerie. I feel an affection for Eliot, in part because his desk, given to me by Valerie, is so much part of my daily life.