Smiling because we have to?

Home>Writing a Woman's Life>Smiling because we have to?
Previous Next

Smiling because we have to?

I came across this blog post, “I Tweeted About The Joker Being a Woman Who Was Tired of This Shit and It Now Feels Auto-Biographical.” It made me smile, then laugh.

“The Joker should have been a woman. And she finally went insane because too many random dudes told her to smile, so now she perpetually smiles while terrorizing Gotham.” Geraldine @everywhereist

Here’s a little from Geraldine DeRuiter’ s explanation of how she came to this revelation:

I wrote this tweet in the lobby of a hotel in downtown Seattle after I’d had a day. An exhausting, emotionally draining day filled with some of the more intense stuff you can deal with in a family dynamic (I’ll just leave it at that). I was waiting for Rand, and leaning with my head tilted back against the wall, and just trying to hold it together. . . .

I sat there, holding it all in because damn it, I’m not messing up good a good winged cat-eye at 4pm. Nope. Besides, I knew: once the wasps get out, you can’t put them back in.

And some guy walked by, some nondescript middle-aged man in a suit, and he saw me, sitting there, my face chiseled from stone itself, and he just had to say something, because lord knows a woman can’t be left alone with her thoughts. And so he shouted – SHOUTED – across the lobby to me.

Geraldine DeRuiter’s story is worth reading because it tells you just how unpleasant it can be to be a popular online personality. But putting aside Twitter vitriol (which she seems to cope with remarkably well), I read her story, laughed about the Joker, then realized that it had happened to me, too, once or twice, having a stranger tell me to smile. I’d never thought about it as a thing, as something women in general experience.

I’m someone who smiles a lot and I think smiling is a good thing, important in relationships of all kinds. But the idea of a forced smile, and the demand that women should always be smiling, has suddenly turned up everywhere. 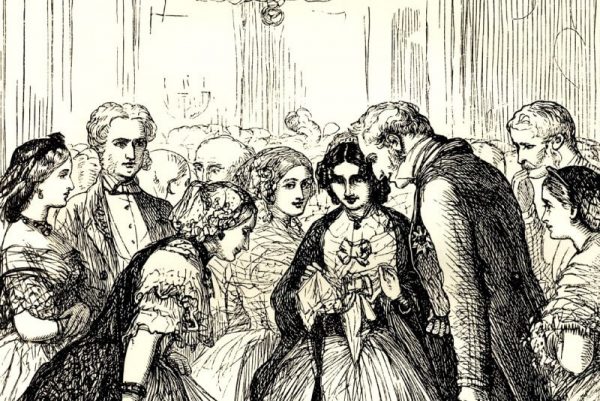 Smiles kept coming up in the Anthony Trollope novels I was reading.

In The Small House at Allington, Trollope mentions women who “smile by rote.” Below is a passage about a woman much admired in society, while the drawing that illustrates this post shows Lady Lufton smiling and curtsying to her nemesis, the Duke of Omnium. I love the other faces in the group around them.

Mr Palliser himself perceived — as he looked at her he could not but perceive — that a certain amount of social energy seemed to enliven Lady Dumbello when he approached her. She was given to smile when addressed, but her usual smile was meaningless, almost leaden, and never in any degree flattering to the person to whom it was accorded. Very many women smile as they answer the words which are spoken to them, and most who do so flatter by their smile. The thing is so common that no one thinks of it. The flattering pleases, but means nothing. The impression unconsciously taken simply conveys a feeling that the woman has made herself agreeable, as it was her duty to do — agreeable, as far as that smile went, in some very infinitesimal degree. But she has thereby made her little contribution to society. She will make the same contribution a hundred times in the same evening. No one knows that she has flattered anybody; she does not know it herself; and the world calls her an agreeable woman. But Lady Dumbello put no flattery into her customary smiles. They were cold, unmeaning, accompanied by no special glance of the eye, and seldom addressed to the individual. They were given to the room at large; and the room at large, acknowledging her great pretensions, accepted them as sufficient. But when Mr Palliser came near to her she would turn herself slightly, ever so slightly, on her seat, and would allow her eyes to rest for a moment upon his face. Then when he remarked that it had been rather cold, she would smile actually upon him as she acknowledged the truth of his observation.

I picked up novelist and poet Paul Auster’s book Talking to Strangers because it has the same title as Malcolm Gladwell’s latest, which isn’t about talking to strangers at all, it seems. Auster’s thinking is in line with mine in the essay that gave a title to the book, and he wrote about smiles, too.

Personal Instructions for S.C. on How to Improve Life in New York City (Because she asked…)

feeling most crushed by the world—and see if it makes any difference.
Smile at strangers in the street. New York can be dangerous, so you must be careful. If you prefer, smile only at female strangers. (Men are beasts, and they must not be given the wrong idea.)
Nevertheless, smile as often as possible at people you don’t know. Smile at the bank teller who gives you your money, at the waitress who gives you your food, at the person sitting across from you on the IRT.
See if anyone smiles back at you.
Keep track of the number of smiles you are given each day.
Don’t be disappointed when people don’t smile back at you.
Consider each smile you receive a precious gift.

Nice to see that he was aware of that smiling can be a problem for women.