Walking down Broadway at the Climate March

Walking down Broadway at the Climate March 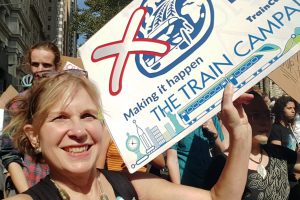 I’m not a fan of big crowds, and my activism generally starts with fingers on a keyboard, but there was no way I wasn’t going to be in New York last Friday, the day of the Climate Strike and Climate March. I took as many photos and videos as I could while also holding a Train Campaign placard, and thanks to Michael Hanish, our wonderful video editor, you can get a glimpse (it’s only a minute long) of what it was like on the street with those thousands of young people. Watch the video by clicking here.

Lots more to come, but in the meantime I hope you will do the other vital thing: make sure your legislators and leaders in your industry know how you feel about the issues. Marches and media blitzes can be helpful in raising awareness and creating a sense of unity, but in the long run it’s the work we do every day that counts. My son, who’s in his early thirties, told me that he looks at the teenage activists and feels guilty that his generation, who graduated from college in 2007/8, didn’t do more. I told him how guilty I feel about having got so much attention as a young environmental writer (here’s a BBC interview from 1989) but not sticking with it to the extent that I should have.

Guilt is useful only when it spurs us to action. Here’s that video link again: Climate March, New York City. These young people give me hope and I invite you to walk with us!