I went to the SupChina Women’s Conference in the hope of learning more about the challenges and differences in the lives of women working in the United States and China.

During many of the presentations, speakers referred to women in positive terms as the main household purchasers, without the caveat that this is the result of them bearing the major responsibility for household management (often in addition to working full-time outside of the home). People hype how women make most purchasing decisions without recognizing that this is not necessarily a sign of women’s power, but of our domestic responsibilities.

It was also troubling to hear the purchasing power of women presented as an altogether good thing since consumption is a major concern in terms of climate change. I cringed when one speaker said that women make forty percent of Maserati and Porsche purchases in China.

Admittedly, this was a business conference, so I couldn’t expect to hear much about personal challenges. But women often are more comfortable than men in talking about the overlap between the personal and professional. I was hoping for more insight and a chance to talk to women outside my other circles.

The SupChina team had brought in an impressive line-up, and filled a large room at the Harmonie Club. Yet I couldn’t quite figure out the point of the conference, and the schedule and layout didn’t allow for comfortable networking. But there was an impressive range of speakers, who mostly avoided the usual tropes (women are always better people, and the classic “cooperation will get us to a win-win situation”). The assumption that women will make the world better when they are in charge is not grounded in fact, and I see too many people offering pat arguments (companies are more profitable if women are on the board) or treating women as if they don’t have agency. But this ferment is good: we need lots of discussion, experimentation, and research. And we need to respect different points of view.

The headline speaker was Arianna Huffington, whom we saw only on a recorded message. She did bring up her new big issue: work-life balance, although I’m not sure that resonated with the audience. I wondered if the star US speakers were familiar to the largely Chinese audience. She said her aim now is to end burnout, which disproportionally affects women.

The most important topic discussed at the conference was the growing possibility of “decoupling,” the development of two separate global communications networks, one Chinese and one American. That would mean technology Cold War, according to author and media entrepreneur Rebecca Fannin, who chaired the technology panel and has a new book coming out called Tech Titans of China.

The conference celebrated the accomplishments of women, mostly Chinese or Chinese American women, and I imagine that there was a sense of solidarity among the roughly 80 percent of the audience who were youngish professional women of Chinese ethnicity. I would have loved to have had a chance to talk to them, to ask why they were there—to hear from role models, to see a celebrity in their field?

I am also curious about the fact that young Chinese women, who follow Western fashion, nonetheless wear clothes that are much more conventionally feminine—lace, sparkly beads, and elaborate trimmings—than you would find normally see in New York, especially in a business setting.

In the afternoon, I had a chance to interview one of the speakers, Ann Hu, a filmmaker who has succeeded in a unique niche: producing films that work in both the United States and China. The conversation went in unexpected directions. I’d prepared questions about constructing narrative, raising money, and dealing with censors, but instead Ann talked about her curiosity about religion and a sense that there might be new things in store for her. (Later, when she spoke on a panel about consumer trends, she conveyed this desire for meaning and perhaps startled the audience by saying, in essence, that money wasn’t everything.)

She described herself as “fusion,” and told me about her quest to understand what makes people cry. “It isn’t misery,” she said, “it’s love.”

Ann has to think about American and Chinese audiences. Americans are much easier to connect with, she said, where in China, you have to “walk a thousand miles.” We discussed the political conflict that is manifesting in the trade war, and she said that the Chinese “fight in silence” and wait until they are sure they will win. This fits with something Henry Kissinger said about the way that the Chinese avoid direct conflict, “building a dominant political and psychological position, such that the outcome of a conflict becomes a foregone conclusion.”

Another interesting speaker for me was architect and artist Maya Lin, who grew up in Ohio and said she felt completely American. She was so personable, and so passionate about environmental issues, that I hoped she would be a role model for women in the audience. 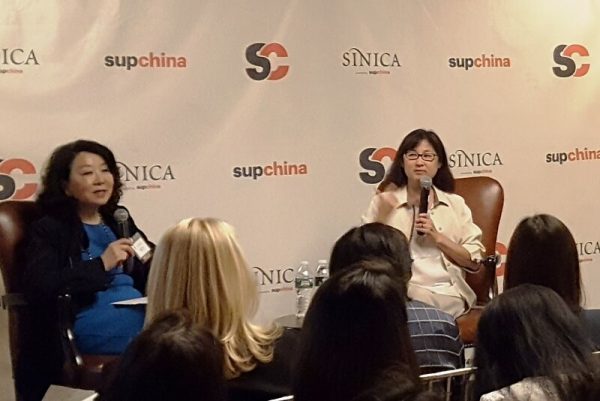 The event would have been more memorable if there had been discussion and even debate about the challenges that face all of us in creating rewarding professional and personal lives. What in our experience is different (based on age, ethnicity, country of birth) and what do we have in common? How can we learn from one another, and support one another?

Another topic that cried out for discussion, and that is of interest to me as a publisher and activist, was leadership. Indeed, we heard from women who can be considered leaders in their fields, but we didn’t talk about social change or the contributions women are making in politics and law, or even in finance and industry.

A notable gap in SupChina founder Anla Cheng’s welcome speech was any mention of the almost exclusively male political leadership in China that shows no sign of changing. Many commentators say that the current political repression under Xi Jinping is the result of the Communist Party’s fear of losing power. One could easily argue that its male dominance is also a sign of fear of change and loss of power.

I would have liked to have heard different views on women’s leadership and then had a chance to discuss them with other attendees. There are significant differences between the United States and China in terms of women’s experiences and expectations, their hopes and dreams. It would benefit US-China relations if we had a forum for conversation and a place to build long-term relationships across cultures—and not only for those of us whose professional lives are already China-oriented.

In fact, Huffington’s new company, Thrive Global, has a mission that would have been a great guiding theme for the conference: What does it mean for women to thrive?