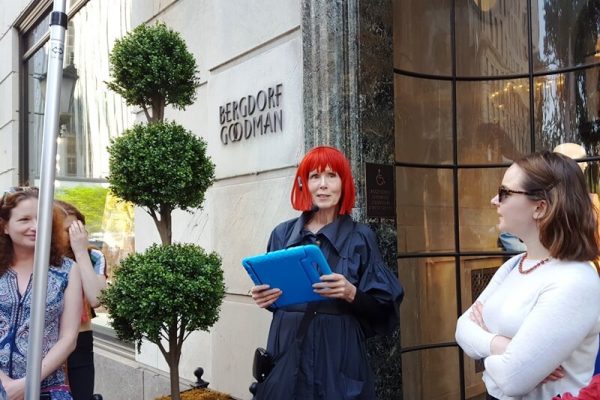 This is E Jean Carroll, who has this week accused Donald Trump of assault and rape. I’ve admired her column for years, and went on her The Most Hideous Men in New York Walking Tour last month. The photo below left was taken on 19 May 2019 in front of the former Studio 54 before the group broke up and E Jean and I went to a bar to talk about publishing. She’d taken us to Trump Tower, but didn’t breathe a word about what was coming in her new book. Read what the Columbia Journalism Review has to say.

Hidden figures are usually silent or silenced figures: the wives of great writers, the unnamed scientific collaborators. But on the Most Hideous Men in New York tour, we talked about another kind of silence. E. Jean has been writing the agony aunt column “Ask E. Jean” in Elle magazine since 1993. Since the tour had been written up in the New Yorker, I thought there might be a huge crowd. But as we gathered outside Bergdorf Goodman (photo above) on a glorious afternoon, I was relieved to see only about twenty-five or so, including a few men. There was even a family group: mother, father, daughter, son.

E. Jean took us from location to location, showing photos of the characters in the various stories that unfolded in locations in or near Fifth Avenue (she pointed out that she could do another tour around Wall Street). We heard mostly about media people and even went inside Trump Tower. The guards did not approach us as E. Jean supplied details told by the women who have accused the US president of sexual assault. 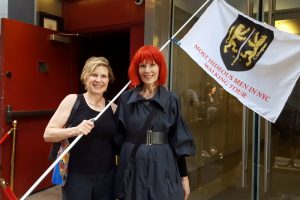 This was, of course, a #MeToo tour—Harry Weinstein, Charlie Rose, Matt Lauer, and others—but E. Jean also took a broad view, so to speak, pointing out that women have been demeaned, harassed, and underpaid in every building we walked past. She also talked about the pay gap, for white women and for women of different ethnicities, a topic that came up the next day at the SupChina Women’s Conference.