Religion for the rest of us?

Home>Community>Religion for the rest of us?
Previous Next

Religion for the rest of us?

On Wednesday I heard a prayer – “grace” – said before dinner for the first time in years. “Thank you, Lord, for this beautiful evening and for our fellowship.” “Help us to serve those in need.”

I’d been invited to talk about the Train Campaign at the Episcopal church’s men’s dinner group. No one I asked knew about this; everyone said I should go.

I had to know, not only out of curiosity but because I would need to report on it to Ray Oldenburg, with whom I’ve talked a lot about the importance of men’s and women’s having their own third places.

A dinner group isn’t quite the same thing, but the need it fills is the same: what church folk call “fellowship” and Ray might call hanging out together.

Ray is for the truly informal, the drop-in-anytime locations, but I am certain he’ll be all for dinner groups, too. We need to preserve and expand all our ways to be together face to face.

Which brings me to churches. As Ray and I plan a new edition of his classic The Great Good Place, one topic on our to-add list is what Ray calls “fellowship halls.” The Catholic Church in my town has one, I know, because after a school accident or scare of some kind I had had to pick my little daughter up there – all the school children had been evacuated to the hall. That hall is used for tag sales and I’m sure much more, and other churches in town no doubt have them, too.

But I don’t go to church. The only time I took my children to church was during a dark period when we’d been stranded in a tiny town in upstate New York. It was Christmas, I had no money, and while I was trying to figure out how to get us out of that hole, I decorated the house, made cookies, and played Christmas music on the radio. And we went to the Episcopal Church, on Main Street in Philmont, New York.

I chose that church because I figured it would be more traditional, less fundamentalist, and that its congregation would be drawn from the more educated people in the area. Episcopalians were rather posh, I thought.

Not in Philmont, New York. But they were absolutely sweet to us, and could not have been more welcoming. Sun streamed through stained glass windows. My little children behaved. They were fascinated, in fact. Three-year-old Rachel leaned to me and whispered, “He said our father is in heaven. I thought my daddy lives in England?”

That little congregation helped us get through a tough time, but until last Wednesday evening I’d had nothing whatsoever to do with church in 25 years.

The man who had sent the invitation, Steve White, turned out to have been the chaplain at Princeton before he retired to the Berkshires, and a neighbor besides.

A man named Ted shook my hand and told me about his grandparents coming up by train and taking a carriage to their house. He then said grace, and I asked why. “He’s a priest,” said John, the retired opera singer who was hosting the dinner.

Their church used to meet in the big St. James Episcopal Church in the center of Great Barrington, but it was condemned as unsafe, I knew, and was then bought and converted into a beautiful arts and entertainment center called St. James Place. We’ve hosted Train Campaign events there, in fact. The congregation now meets at Crissey Farm, “behind the brewery,” and has a woman rector, and its traditions like the men’s group dinners.

I told Ted that my daughter had shocked me that afternoon by announcing, “When I get to law school, I’m going to find a church, a Unitarian church, to go to.”

If she’d said she was going to get her arms tattooed, I wouldn’t have been more surprised. She stopped with in my tracks with that one. “A church?” I asked.

“Churches are important,” she said, “they have a sense of community.”

I’ve been talking about community her entire life and I’ve probably said those words myself. But the idea of actually going to a church when you don’t believe in God or in its dogma, that was beyond my ken.

“They don’t talk about God much at Unitarian churches,” she said, “If they do, I’ll find somewhere else.”

She has decided that the world needs what churches offer: a sense of community, a chance to reflect, a reminder that we have larger obligations to one another. “And there’s nothing else, Mom.”

Indeed, there is nothing that fulfills just that role, and I am going to talk to Ray about how we should approach the subject in The Great Good Place. My job is to draft the new chapters, with notes from him, and this one is going to be challenging. I’d be grateful for your ideas and any stories you have about the role churches have played in your life. Here are a few things that come to mind:

The opening of the movie Mrs. Miniver, where a congregation joins in a hymn in a church that has been bombed by the Germans. Voices raised in song still give me a great sense of peace and hope.

The warmth of the little congregation in Virginia where my uncle was pastor. Their theology was harsh and dogmatic, but I had a sense of being loved and welcomed that was overwhelming to me as a very much disconnected teenager.

The intensity of the world’s reaction to seeing Notre Dame Cathedral in flames. This made me realize something of the imaginative power of churches: in spite of all the damage done by practitioners of religion, they can still remind us of things that really matter – including beauty. They can draw us together, give us hope and courage, offer us a sense of transcendence, and remind us of things that are more important that our differences.

I just plucked Ian Johnson’s The Souls of China: The Return of Religion After Mao from my shelves. It suddenly seems very important to understand the appeal of religion in the world’s largest country. And it makes sense, as I think about the materialism of the China I know, the lack of any moral markers, and the demise of extended families and the village communities that have always been the central certainty in people’s lives.

Where, without religion, do we get a sense of ethics? What internal rules shape how we see ourselves when we look in the mirror?

And there’s the question my daughter posed. What is there except churches that do what churches do?
When I got home from the men’s group, thinking about her plan to go to church, I went online looking for an essay from the Coevolution Quarterly, a funky magazine published by the people who produced the Whole Earth Review away back in the 1970s. Anne Herbert’s essay spoke to exactly the question my daughter was asking.

I miss church. You non-church-goers should know that Church As I Knew It, in the middle of the road, was nothing like Elmer Gantry. No one cried, and if you pushed people on what they believed, a lot of them were more vague than dogmatic – something about God existing, something about Jesus being special, something about modified altruism being better than pure selfishness. A lot of what was happening was people with lots of non-religious values in common (political conservatism, family life) getting together once a week to hang out. It was a nice place to hang out. If you didn’t like grownups, you could volunteer to hang out with children without having to actually have any. If you didn’t like big crowds, you could volunteer for the cleanup or preparation committee and hang out with other people who didn’t like crowds and sort of liked shit work in a way, like the volunteers at the Jamboree. Also you could find out if you wanted to be friends with people without doing something artificial like going out to lunch. Read the whole thing >

A place to hang out. A place to meet people without arranging anything in advance. A place to be silent. A place to think about something other than yourself for a while. That may be the most important thing, when I think about a church service: stepping outside our own limited worlds, putting aside our personal concerns, and joining with people we don’t even know.

Tonight is the full moon, which is an especially important symbol in China. This weekend is both Passover and Easter, holidays of renewal and change. I took the photograph of Notre Dame Cathedral exactly a moon month ago. Transcendent beauty but something more: a reminder of the power of voices joined, of what we can be together. 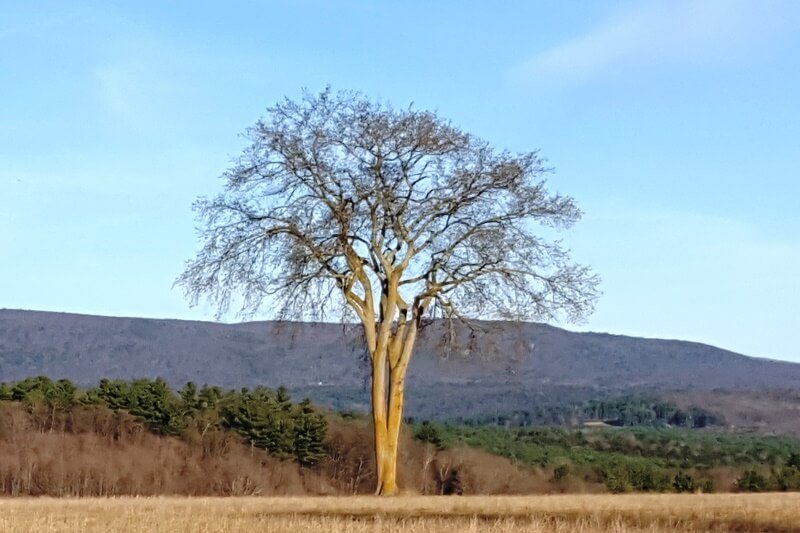 The Baldwin Hill Elm, which I saw for the first time this week on my way to speak to the men’s church group. I’d been talking a lot about trees – also an important symbol in many religions – with a guest from the UK, and this certainly is a beautiful and meaningful tree.

Karen Christensen is an entrepreneur, environmentalist, and scholar who writes about the many ways women have gained and wielded power. She is the owner and CEO of Berkshire Publishing Group, a trustee of the University of Pennsylvania’s Penn Press, a member of the National Committee on US-China Relations, and founder of the Train Campaign. Read Karen’s occasional dispatches from the frontlines of international publishing at the Berkshire Blog (or subscribe by clicking here) and follow her on Twitter @karenchristenze.

Karen in the Press