What do Valerie’s clothes say?

Home>Writing a Woman's Life>What do Valerie’s clothes say?
Previous Next

What do Valerie’s clothes say?

I hadn’t realized how useful clothes can be in understanding a life until I talked to Sarah Byrd, a fashion historian in New York. Her contention is that fashion is the most important part of everyone’s history. While I don’t go quite that far, Sarah helped me look at – quite literally – the women I am writing about it a new way.

Sarah and I met in a Chinese restaurant on 8th Avenue and went through a folder of photographs I’d brought of Valerie Eliot. My curiosity about fashion had began when I noticed how often clothes were mentioned in people’s memories of Valerie Eliot, and as I puzzled over how old-fashioned she always seemed to look in photos with her husband.

Sarah explained that there are many ways to look at clothing choices. Money may be a factor, modesty another. Then there is fashion, the shapes and colors and combinations that are popular at a given time and in a particular place.

Long before I thought of writing about Valerie, I met a well-known author’s daughter at the house of a mutual friend. There had been something of a row about a comment this woman had made about Valerie in a newspaper article. She told me, however, that she didn’t remember the row at all, then added that what she did remember was Valerie in a gold lamé evening dress. She said this with a look I translated as, “You can imagine, can’t you?”

I’ve heard that kind of remark again and again when I talk to people about Valerie, who was tall and rather large, and not someone who naturally wore clothes well. Her looks and clothing were not admired. There is general agreement that she liked loud colors and dramatic effects (flowing pink chiffon, for example), and wore too much makeup.

Even as a young secretary, it seems that she wore flamboyant clothes and colored her hair. What was most striking to me, though, is that she dressed like a much older woman. The photograph you see here is a good example. It was taken when the Eliots were on their honeymoon in the south of France in January 1957. 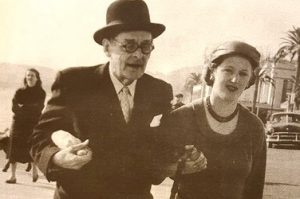 Eliot is in a suit and Valerie is formally dressed, and wearing court shoes (pumps). I once looked at the photo with Linda Melton Benson, a former secretary of Eliot’s who was just a couple of years older than Valerie. Linda pointed to the young woman in the background – who is wearing a pullover sweater, a loose calf-length shirt, and flat shoes – and said, “That’s how I dressed!”

Of course they may have just gone to church – social context also matters – but I now look at Valerie’s fashion choices as another way to understand who she was. Had she deliberately chosen clothing a generation too old, in order to bridge the thirty-eight years between her and her husband? She told me that “Tom liked bright frocks,” but I’ve always wondered if it wasn’t Valerie who liked bright frocks and Tom simply liked Valerie. He thought she was beautiful, which not even the most charitable friend did. (I can’t count the times I’ve been told that she “had a lovely complexion you know.”) 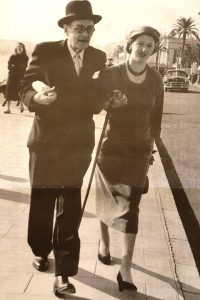 People dress to fit into a social class, and much of the commentary about Valerie’s clothing was to suggest that she was of rather low class. I heard her described as looking like a barmaid more than once. For all her ambition and her defensiveness about people’s looking down on her, Valerie never seems to grasped the obvious, that a woman aspiring to a higher class than the one she was born to should have been wearing a twin-set and pearls, or perhaps copying the clothing of Princess and then Queen Elizabeth, who was almost exactly the same age.

One of Valerie Eliot’s classmates from the 1940s, Daphne Selfe, became the world’s oldest fashion model, and her memoir, The Way We Wore  provides an almost exact fashion timeline for Valerie’s life. But Selfe was clearly stylish, fashionable. Valerie was not. I rather admire the fact that she seems not to have cared what people thought.

And that may have helped me get the job as her assistant. I am not much of a dresser, no natural stylist, and I wore an inappropriate outfit to my interview at Faber and Faber. I thought that my talents and skills had won her over in spite of my appearance, but now that I understand Valerie better, she may actually have liked my clothes!

PS: Writing this post brought to mind a book I’ve known of for years but never read, novelist Alison Lurie’s The Language of Clothes. I am ordering it now and may have more to say about Valerie’s clothes before long. Sophia Mumford’s clothes also tell a story, and I might even see what I can learn from their husbands’ fashion choices. After all, Virginia Woolf called Tom Eliot the man in the four-piece suit.

Here are lots more photographs of Valerie Fletcher Eliot. See what you think!