Letter from Oxford: Wives, Daughters, Mothers, and Other Women behind Famous Men

Home>Writing a Woman's Life>Letter from Oxford: Wives, Daughters, Mothers, and Other Women behind Famous Men
Previous Next

Letter from Oxford: Wives, Daughters, Mothers, and Other Women behind Famous Men

It’s International Women’s Day and I am at the History Faculty in Oxford, at Thanks for Typing: Wives, Daughters, Mothers, and Other Women behind Famous Men, a conference at the University of Oxford organized by Wolfson College.

Here’s the conference background: “When a series of tweets with #ThanksForTyping hashtag appeared in 2017, picking brief references to wives’ assistance from the acknowledgement sections of academic works, these tweets went viral. They demonstrated that even in the 20th century wives of male academics, who did significant work towards their husbands’ research and publications, rarely got any proper credit and mostly remained anonymous.” 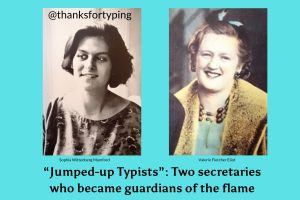 I’ll be speaking tomorrow about Sophia Mumford and Valerie Eliot, who were married to Lewis Mumford and T. S. Eliot.

Today I’m chairing a panel about political activism, which is a topic I wrote about in a chapter I wrote on the subject in Women and Leadership (Goethals & Hoyt, eds. 2017). You can download a PDF of “Leading from the Fringes: Women’s Paths to Political Power” here. This is how it opens:

Women have found ways to exert influence and gain power through their relationships with men, even during times in which there were legal, social, and religious barriers to their achieving any independent public position. By looking at women’s hidden or informal influence, we go beyond the view that women associated with powerful men were merely royal breeders, glorified servants, or sex workers, and acknowledge that they sometimes were, within the bounds of their time and place, leaders. And some women associated with powerful men rose in their own right to the pinnacles of power.

In the Tang dynasty, for example, a minor concubine used her intelligence, steely determination, and remarkable political acumen to become Wu Zetian (624–705), the only female emperor in the history of China. Other women have stayed on the sidelines, without official position and sometimes barely known in their own time, but nonetheless played a vital role in national and world affairs.

This is a universal phenomenon. Women have striven for status and influence across the world and throughout history: concubines became empresses, courtesans directed kings, and salonnières were the center of intellectual and political life in Enlightenment France and in London at the height of the British Empire. In the twentieth century, there were Washington hostesses who wielded power behind the scenes, and some recent national leaders, including Park Geun-hye (b. 1952) of South Korea and Cristina Elisabet Fernández de Kirchner (b. 1953) of Argentina, who came to power through a male relative.

Women who exert political power from the sidelines generally gain this power as a result of marrying a powerful man or being born into a powerful family without a strong male claimant. Sisters Soong Ching-ling (1893–1981) and Soong Mei-ling (1898–2003) came from a well-connected Chinese family and married men who became world-famous leaders, Sun Yat-sen and Chiang Kai-shek. Others created a platform for themselves by using not only physical beauty but intelligence and artistic talents, even wit and social networking skills.

Of course women’s looks and sexuality have often been central to their roles on the sidelines of power. Attractive women have sometimes achieved positions of power that would not have been available to other women. More importantly, women’s ability, or inability, to bear (usually) male heirs has often shaped their destinies. For courtesans, some of whom, in both Europe and Asia, achieved considerable status, wealth, and influence, skill in lovemaking was prized, but in general women’s sexuality was considered risky: Elizabeth I (1533–1603) of England was probably a more effective leader as the Virgin Queen. . . .

The classic pattern was a beautiful or sexually attractive woman who used her personal attributes to attract or “catch” a man and thus to rise in the world, first by obtaining wealth and status but then by exerting power through her husband. Such women have often been regarded as mere gold-diggers, or as proxies for their husbands or families. They have been criticized and denigrated when they, like Edith Wilson (1872–1961), who took over many of husband Woodrow Wilson’s executive duties as president after he suffered a stroke, claimed they were only carrying out their husbands’ wishes—and, of course, maintaining their husbands’ position and power. But the reality is that they often exerted their own ideas, and influenced the men whose names we know while theirs have faded from history.

In the twentieth century, there have been influential wives and daughters, some of whom became politicians themselves. Most notable among them is Eleanor Roosevelt (1884–1962), perhaps the wife who was most successful in achieving her own place in history, campaigning and participating in public policy during her husband Franklin’s presidency and serving as a delegate to the United Nations General Assembly after his death. . . .

Today, more and more nations are led by women. In Europe, they have generally risen without the help of a father or husband, but in Asia and Latin America it remains common for women to become leaders as a result of their relationships with a man, often following a husband or brother into office.

The speakers at Thanks for Typing are scholars working in many fields – this first panel focuses, for example, on women in the medieval artistic world. I’ve already found that this topic, of the women behind or at the side of “great men,” provokes a lot of discussion, and am looking forward to conversations here in Oxford, and with our friends and colleagues in the days ahead.