The article I wrote for Valerie Eliot about novelist Djuna Barnes

The article I wrote for Valerie Eliot about novelist Djuna Barnes

Valerie Eliot agonized about writing anything. It drove me crazy.

There was, for example, a footnote about a reference to “charflappers” in a letter from T. S. Eliot (TSE) to his American publisher Scofield Thayer that she rewrote, or rather we rewrote, dozens of times. I’d think we had put that question to bed, and a day or two later she would say, “Remember that footnote, dear, the one about charflappers?”

I don’t think I ever showed my impatience, but that kind of fussing was definitely one of the reasons I finally, reluctantly, left her.

She had been praised for the edition of The Waste Land she edited, but that had been only a few years after Eliot’s death in 1965. The letters, her life’s project specifically bequeathed to her by her beloved husband, had become her life. She’d been at it for over twenty years when I started working for her in 1986.

Until we delivered the manuscript for the centenary volume I could use the Faber & Faber deadline to get her to let go of things, but once that box of printed pages had gone off, I lost my leverage. There were still volumes ahead (only another four at that point, though, not the twenty talked about today). She was relieved but also more nervous than ever, because the first book of letters would be published in a remarkable short time, for TSE’s 100th birthday on 26 September 1988, and all eyes would be on her, the upstart typist who thought she could edit Eliot’s work.

Academic footnotes demonstrate the insight and historical knowledge of the editor, and that’s why the word charflappers was so worrying. This was before the internet and she couldn’t be sure that it was a common term that had some meaning she would be mocked for not knowing. I, on the other hand, felt sure, after she’d done all the searching she could at the British Library, that its meaning was obvious: the girls in Oxford, where the Cherwell River runs, the trendy types – the flappers of the 1920s. A recent biography by a professor, Robert Crawford, agrees, offering this definition: “coquettish young women on the Cherwell.”

What Mrs. Eliot loved to do was tell stories about TSE and her own experiences with famous people. This got her into trouble one night, when she sat next to the literary editor of the Financial Times at a dinner.

Djuna Barnes’s controversial, modernist novel Nightwood, which included lesbian relationships, was published by Eliot in 1936. A collection of Barnes’s interviews had just been released by the feminist press Virago. Over dinner, Valerie had entertained the FT editor with stories about Barnes, and he suggested she write a short article.

I heard nothing but Djuna Barnes for the next few weeks. Valerie told me her stories over and over again, but could not put a word on paper.

I finally suggested she let me jot a few things down, to get her started. By that time, I knew the stories cold. I wrote them down, just as she’d told them and organized in a way that seemed interesting to me. The tone was conversational, and that made Valerie nervous, but she sent it off anyway, just as I’d written it.

The editor ran the piece immediately and wrote to say that he generally paid £150 for an essay of that length. VE, much relieved, responded that he should donate it anonymously to the Royal Literary Fund. I sighed over that £150 (I was making £7 an hour and the main breadwinner for my young family), but knew that it would never occur to her to pay me something extra, or to acknowledge me.

From her point of view that wasn’t something even to consider – the secretaries and wives who drafted, edited, and polished a man’s prose were simply doing their job, and that’s what I had done, and would, she thought, keep on doing, side by side, year after year.

It was gratifying nonetheless to have a big newspaper publish something I’d written. I signed my first book contract only a couple of months later, and that publication in the FT perhaps gave me a little extra confidence.

Here’s the article about Djuna Barnes, a most interesting woman and writer, and a photo I took recently of Patchin Place.

I Could Never Be Lonely Without A Husband: Interviews by Djuna Barnes. Virago. 5.50 Pounds (pds) (paperback). 396 pages.

I met Djuna Barnes in 1958 at a New York cocktail party given for my husband and myself by Marguerite Cohn of the House of Books. Afterwards, as we descended in the packed elevator, a nervous voice was heard saying “Oh, Miss Barnes, I do admire Under Nightwood!” “Young man,” she replied, banging her cane on the floor, “you are confusing me with Dylan Thomas!”

Djuna and T S Eliot were introduced briefly in Paris in 1921, and became friends 15 years later with the publication of Nightwood. Towards the end of 1935 he had received excerpts of her novel from Edwin Muir which he thought unpromising, the style “incredibly tortured and tedious.” But following a visit from her champion, Emily Coleman, bearing the manuscript, which he read twice, TSE was overwhelmed. Seeking to convince a naturally apprehensive Geoffrey Faber that the book should be published, he wrote:

… I believe that this may be our last chance to do something remarkable in the way of imaginative literature … This writer is somebody to whom something has happened that happens to very few (because we don’t want it): she has caught up with her own sorrow, identified it and tapped it on the shoulder … it’s a sorrow much deeper than personal vicissitudes, of course, because it is the sorrow of life, the worm unkillable by any of the agents of this world. And as for her style, it has what is for me the authentic evidence of power, in that I find myself having to struggle, directly after reading, not to ape it myself: and very few writers exercise that pull.

TSE rejected Mrs Coleman’s title, The Anatomy of Night, and restored the original as he wanted “something brief and mysterious, giving no clue whatever to the contents.”

Djuna came from Paris shortly before publication and, typically, had a complaint: the book had been bound in purple, a colour she abhorred. All publishers were anathema to her, and fond as she was of TSE, when he wore his Faber hat she could be merciless.

In 1954-55, TS enlisted, as “a work of genius and inutterably absurd.” Although it had an unsuccessful reading at Harvard in 1956, TSE regarded it as Djuna’s second masterpiece and Dag Hammarskjold (whose death was a personal blow to her) co-translated it into Swedish. 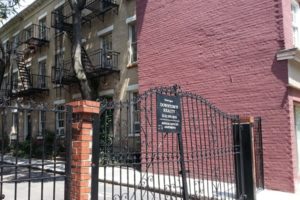 On 12th June 1969 I was in the New York Public Library transcribing The Waste Land when the telephone rang with an invitation to dine that evening with Ezra Pound and Olga Rudge, who had arrived unexpectedly from Italy some days earlier. (This was his first visit to America since being released from St Elizabeth’s Hospital in 1958, and he had wept at the sight of the Waste Land manuscript.) I explained that Djuna and I were going to celebrate her 77th birthday at her favourite French restaurant, Charles, in Greenwich Village and they urged me to bring her for drinks afterwards as they were staying nearby. Djuna received the news in silence but began to eat slowly, paused lengthily between courses and talked – inordinately about Dolly Wilde, Oscar’s niece.

I knew Ezra did not admire her work, but they had always liked each other, so finally I asked why she did not want to see him again. “I am frightened because it is almost 40 years since we last met,” she answered.

It was approaching midnight when we left and feeling that I should apologise to Olga, I ran up the steps to their door, which was opened before I reached it by Ezra’s grandson, Walter. “We’re waiting!” he called. There was no escape. As Djuna climbed painfully behind me, I suggested that she should reminisce about their Paris days. This she did superbly. An occasional chuckle came from Ezra who sat with folded arms as she recalled people they had both known. When Peggy Guggenheim was mentioned, Olga nudged Ezra and said, “You never liked her, did you?” Djuna stopped and I feared the spell was broken. Fortunately Olga continued, “You always thought she had poor legs!” As Ezra laughed and nodded vigorously Djuna resumed her narrative.

When we rose to leave, to everyone’s astonishment Ezra jumped up in his slippers to accompany us in Walter’s car. On reaching Djuna’s courtyard, she said peremptorily, “Come in a moment Valerie, I want to speak to you,” so the two men waited while I obeyed. “I never thought I would see Ezra in this condition,” she said almost accusingly, obviously distressed. But as we continued our journey to the East Side where I was staying, I could feel Ezra’s delight in revived memories.

TSE recalled taking her home after they had lunched at the Lafayette. The New York taxi-driver, who had listened intently to their conversation asked “Who was that dame?”

On being told, he thrust out his newspaper with a request for the name to be written down, as he wanted if for his brother-in-law “who’s got culture.”

I am grateful to the Virago Press for making this collection (I Could Never Be Lonely Without A Husband: Interviews by Djuna Barnes) available to us. The interviews, covering the period 1913-1931 and illustrated with Djuna’s drawings in the Beardsley manner, were done not only to pay the rent but also to support her divorced English mother and three brothers. They convey her voice and preoccupations; the article on James Joyce – who gave Djuna his annotated copy of Ulysses, which she later sold for someone else’s benefit – is particularly impressive. Whenever she referred to them in conversation, I wondered if any of her subjects had felt disconcerted as she fixed her mocking grey eyes on them. She remarked once that, having no French, she had interviewed Maeterlinck “by osmosis.”

In 1940 Djuna returned reluctantly to America, almost penniless and dependant on meagre royalties and a small, uncertain allowance from Peggy Guggenheim. She shared a room with her mother for a while before moving to Patchin Place, where her apartment consisted of a room and a half, with closet, bath and a kitchen “you could put in your pocket.” During the war, TSE paid her London furniture storage-costs and in return she sent him beef and cigarettes, denying his suspicions that she deprived herself as a result.

Living frugally, often ill and lonely, she was nevertheless gallant, proud and difficult. The last few years of her life were eased by money from the sale of her papers. I remember her tall, spare figure, held very erect, in a neat black costume with a polka-dot blouse, a fur hat on her head and carrying a silver-headed ebony walking stick. Any enquiry about her health would be met with the words: “Breaking up nicely, thank you!”