Home>Oddments>Sense and sensibility
Previous Next 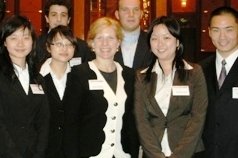 I spent most of today at a Chinese climate change symposium, with many speakers and a ton of information on initiatives in construction and car manufacture. Did you know that China uses 40% of the world’s cement each year? I will get back to Beijing news tomorrow; tonight, some literary thoughts.

The conflict between sense and sensibility is the theme of one of Jane Austen’s novels, and I was thinking about it this week after rereading one of my favorite passages from all of Lewis Mumford’s writings. Well, from those I have read. I can’t claim by any means to have read them all. And from what Rosalind Williams of MIT wrote recently, I’m not sure I ever will. On rereading Mumford’s Technics and Civilization, she finds that, “Flashes of brilliant insight were nearly obscured by billowing clouds of pompous oratory, unsupportable generalizations, and smug self-absorption.” But many people think his best writing is in his early books, and in the memoir, Green Memories, he wrote about his son Geddes, who died in World War II. Mumford was also a prolific and charming letter writer. Here’s a passage I love, from a letter he wrote to his wife Sophia in 1920, when he was 25:

London 1920
Beloved old comrade, this is a birthday letter: and I want it to do all the things a birthday letter is supposed to do. The usual wishes for happiness are always a little banal, because people do not know what they mean then they talk about happiness: they think it is pleasure, or comfort, or having all you want in the world, and they are disappointed when they find that these things have as much capacity for producing misery as for creating anything else. When I say that I wish you happiness I mean that I hope as you grow older you will become more and more intensely alive. The happiness that I wish you doesn’t exclude pain and defeat and dejection: it consists in using joy and depression equally as a means to a growing and expressive intelligence: so that my wish is not to save you from any possible experience but to give you the means of cultivating it in order that you may bud and flower more gloriously and bring forth good seed. A human being’s growth — and I speaking too prosily? — is expressed in his capacity for relationships; in the extent to which he is able to work the thread of his own being through the mingled tapestry of other people’s lives. You have been waxing sturdily during the last year, beloved old comrade, and you will continue to grow, and every particle of yourself that you have bestowed on other people has added, you will find, to your own stature and strength, for, as Old Walt says, the gift is to the giver and comes back most to him. So I wish you no other increase than an increase of life, and in wishing you that I am wishing you everything. Lewis.

Sophia Mumford and I met in 1993, and I saw her once or twice a week until she died in 1997. She believed, with Lewis, in living wholeheartedly, in following your own beliefs and values whatever the cost. This led both of them into difficult situations, in their personal lives and also in the public sphere, especially before World War II (when they were early advocates of American entry into the War) and during the Viet Nam War (Mumford was the first major public figure to denounce Johnson’s Viet Nam policies). There was little Sophie regretted about her life; she certainly never wished that it had been easier, less risky.

It occurred to me a few days ago, on the plane to Beijing in fact, that Jane Austen’s Sense and Sensibility is about the same choice, between, on the one hand, following one’s heart and welcoming intense emotion, whatever the cost, and, on the other hand, choosing the safe path. Novels and movies are filled with stories based on this dilemma. Often the protagonists choose excitement, intensity, glory, and—usually—early death or disaster. In some books, such as Upton Sinclair’s Main Street and Austen’s Sense and Sensibility, the main character takes drastic romantic risks but in the end settles—or is placed by the author—into a dull, safe life, a far cry from Mumford’s ideal of being “intensely alive.”

I first tried to read Jane Austen in sixth grade, in California. I don’t know how I got a copy of Emma, or how I would have known that Jane Austen was essential for someone aspiring to be well-read. But I was confused by the fact that the author’s name on the cover was larger than the title, and like many young readers I couldn’t make out the nuances of the story. It was another couple of years before I finished one of her novels, and another few years before I really began to enjoy them. After I moved to England, the irony, and the ideas about class and breeding that are integral to Austen and other novelists for that matter, became clearer. The characters and their motivations aren’t hard to grasp, to relate to people and behaviors closer to home, but like tribal dress, a different diction and mysterious manners can prevent our recognizing human universals.

As a California teenager, I didn’t at all understand what sensibility meant in the context of Austen’s time. Only when I learned about the Romanticism did I get an inkling of the kind of reckless responsiveness to emotion (whether in reaction to a landscape, a run-down cottage, or another human being) that was early 19th-century sensibility. In the novel, there are two sisters, one who is relentlessly sensible and the other who has so much sensibility, and susceptibility to a charming but dishonest suitor, that she nearly dies.

And this does have significance today. While we see a conflict between sense and sensibility, between comfort and intensity, the Chinese might be able to see it as yin and yang, a relaxed dualism, opposites in harmony. Having your cake and eating it, too, perhaps, but it seems to me, thinking about creating a sustainable future, that we need to be both practical and passionate.

(I feel like I deserve an award for linking Mumford and Austen in one piece of prose! Who next–Tolstoy and Al Franken?)